Magneboots ("Journey outside the airlock")

Girl Trouble
The Blarg Tactical Research Station (BTS) is a space station located in Nebula G34 in the Solana Galaxy, and appears in Ratchet & Clank. It is Alonzo Drek's research lab and a weapon testing center for the blarg, connected to several asteroids in the nebula to refine their metals for testing. The station is used to test many gadgets, and contains mutant aliens as well as blarg commandos.

Ratchet and Clank arrived, looking for gadgets and for Chairman Drek's location, after an infobot on Eudora gave them coordinates to the station. Here, they could both explore the space station, take a shuttle to explore the blarg warship located outside, and Clank could journey outside the airlock where Ratchet was unable to breathe. During "Explore the space station", the two fought through mutant aliens and blarg space commandos before encountering an Alien Queen, an enormous alien snapper. After defeating the Alien Queen, they finally met Fred, who was an engineer who developed the Grind Boots, which the two purchased for 2,000 bolts, a price Fred claimed included the employee discount.

The two also took a shuttle to the warship outside in "Explore the blarg warship", which contained an infobot. After pressing the "big red shiny button" in the command bridge of the warship, the ship began to self-destruct, commencing a countdown for them to leave. Doing so allowed them to flee before it was destroyed, and then view an infobot containing a news report by Darla Gratch on Rilgar, thus giving them coordinates to the planet.

During "Journey outside the airlock", Clank explored several areas from the exterior, and commanded Gadge-Bots to allow him to proceed further. Eventually, he found the Hydrodisplacer before returning to Ratchet. Ratchet was unable to venture outside the airlock until acquiring an O2 Mask.

In Qwark's retelling of events, after Ratchet and Clank were recruited to Galactic Rangers, he assigned them the mission "Find the top secret Blarg research project", having knowledge that the blarg were working on a secret project, but unaware of what it was. After exploring the space station during this mission, the two found that the blarg were trying to grow a mutant army and aliens, and their secret project was the ability to control a blargian snagglebeast, much to Qwark's surprise. The two then defeated the snagglebeast and survived.

While at the station, the two were also able to explore it further. Clank could "journey outside the airlock" to command gadgebots to venture out and find a set of Magneboots for Ratchet. Both could also search the nearby blarg weapons transport warship for weapons, to find a Predator Launcher, though retrieving it caused the warship to self-destruct.

The Station is located amidst a small asteroid field, and in fact, uses several of them as housings for rooms of the station. It is effectively a loop, with the landing bay being connected to the other end of the station by a long grind rail, easily visible as the snaking glass tube. There are also several minor rooms, structures, and buildings located on the asteroids or floating nearby, though these are inaccessible.

Starting at the landing bay, there is an airlock leading to three stationed spaceships, an inaccessible grind rail opposite the airlock, a shuttle that leads to the decommissioned blarg warship, and a corridor blocked by a forcefield opposite the shuttle. Said corridor is home to a small population of alien swarmers, which ambush you near the end. The corridor ends in a smaller chamber of the space station, which then leads to another forcefield-blocked and swarmer-infested tunnel. An Invinco-Locked room filled with crates is situated at the end, though a side passage leads to a larger area with a missile located prominently in the center. This room, and the previous end of the tunnel, are all located within a hollowed-out asteroid.

A series of platforms and a versa-target leads to another room that has two alien snappers locked within glass tubes, kept asleep by power generators, and another forcefield blocking the exit. Afterwards, there follows yet another tunnel infested by swarmers, which leads to the inner space of the largest asteroid. The first room is a containment area for the mutants, though all were freed, notably one cage appears to be missing a rear wall and exits into a small cavernous room.

On the other side is another large circular room, easily visible from the exterior, as it is the large station embedded within the largest asteroid, featuring many observation windows, with a large ring surrounding the lower base. Its interior is mostly empty, safe for a trio of metal platforms, kept separate by forcefields, which are connected to power generators placed near the central metal housing of the chamber. The following part is a large and cavernous expanse, notable for the green tint and strange alien nest-like growths on the walls and ceiling, and is home to the Alien Queen. Finally, the last and final room follows through a doorway on the left side, where Fred was encountered. It also contains the start of the grind rail connecting to the landing bay.

Once outside the airlock, there is a metal platform with a missile standing upright, and a trio of spaceships visible in the distance. The first on the left, seemingly connected to the platform by a thick tube, perhaps for refueling, must be entered through a hatch on the side. The cockpit is accessible, featuring four small chairs, though the ship is otherwise empty and appears to be missing its rear half. A platform is located outside the rear exit, with a large stack of metal crates, pushed up against another spaceship, which seems to be missing nearly all of its hull. Either might be yet experimental, in construction, or perhaps in the process of unloading, due to the presence of large shipping crates.

The second ship connects to a third by another refueling tube. The third is notable for being seemingly complete and containing a rather large amount of turrets on the exterior of its hull. There are four Gadge-Bots located inside, as well as a small group of alien enemies and a lone Hydrodisplacer on the bridge. Picking up the latter triggers a path to extend from the very first platform to connect to the spaceship's bridge. 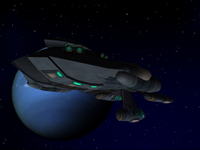 The exterior of the blarg warship. 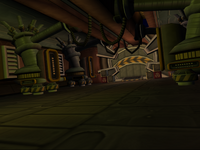 The interior of the blarg warship.

The warship connected to the station was shut down after being overrun with mutants from the labs.[1] It has a long fuselage and a narrow overall profile, primarily dark gray in color with green and orange trim. It has three engines in the back, two towards the rear, and one hanging below as a rudder. Two large and thick wings are placed near the front side, notably lacking engines but bulbous and thick in size.

The transport shuttle will dock on one of two entrance points at the rear of the ship, both of which lead to a small room, inhabited by a lone blarg space commando, which then splits into two curving corridors, each infested with alien swarmers. Those two paths then recombine into a larger area with two more commandos. Machinery with unknown purposes flanks the sides of the place, which leads to a larger red-tinted chamber, home to three snappers and a massive red button located in front of the sole window.

The layout of the Blarg Tactical Research Station is largely similar in Qwark's version of events. In the final room inside the station where the Alien Queen was found, the blargian snagglebeast is instead found, and the room is a large, red room filled with lava, with an elevated metal room behind a glass window from where blarg scientists control the snagglebeast. The door leading outside the airlock is instead a ventilation shaft only Clank can fit through, meaning Ratchet can never travel outside the airlock. This area is largely similar, though only two ships are connected outside rather than three.

The layout of the warship connected to the station is also identical, with the exception being that in place of a red button, the Predator Launcher is contained, and removing it causes a self-destruct sequence.

Insomniac Games artist Chad Dezern (now the North Carolina studio director) drew a piece of concept art named "Asteroid Observatory" for the first game that showed many of the hallmarks of a trademark Ratchet & Clank level—hoses, antennae, and clustered building composition. This picture later became the inspiration for Nebula G34 - Blarg Tactical Research Station, or as they called it back then, level 6.

According to cut audio files, the Gemlik Base was originally going to be located at Nebula G34 instead, and gold weapons would be bought from here instead.[2]

In each of the small computer monitors scattered around the station, if the first person view is used to see the screen, one can see Dan Johnson's face with an arrow pointing at him, along with other employees. The Insomniac Games logo is also visible in the lights of the destructible lamps.

Concept art from the re-imagined game.

Concept art of the warship's interior from the re-imagined game.