Ratchet & Clank Wiki
Register
Don't have an account?
Sign In
Advertisement
in: Locations in Up Your Arsenal multiplayer

Turrets
Blackwater City is a map in the multiplayer mode in Up Your Arsenal. It is very similar to the area of Blackwater City seen in the Galactic Rangers' Operation: BLACK TIDE. It is a mirrored map in which each base exists on an island either at the top or bottom end of the map respectively. From the starting base's island, a ramp at the end leads up to a large, round platform, where a Holoshield Glove, a Mine Glove, Charge Boots, and a player-controlled turret can be found. A wide bridge at the end of this platform leads to an opposing round platform, with versa-targets adjacent to the bridge also used for traversal.

To the back of the central platforms are bending bridges that lead up to small, elevated platforms containing well-guarded nodes. The node on the right from the closest base contains a Minirocket Tube and a Lava Gun, while the node on the left from the closest base contains a Flux Rifle and a Morph-o-Ray. Versa-targets exist across these platforms to reach the platform on the opposite side that is closest to the nearest base. 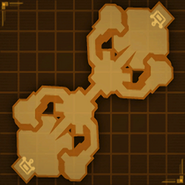 Map of Blackwater City.
Locations in the Solana Galaxy in Up Your Arsenal
Community content is available under CC-BY-SA unless otherwise noted.
Advertisement