Ratchet & Clank Wiki
Register
Don't have an account?
Sign In
Advertisement
in: Locations in Up Your Arsenal multiplayer

Capture the Flag, Deathmatch
For the area in the single player, see Aquatos#Sewers.

Aquatos Sewers is a map in the multiplayer mode in Up Your Arsenal. It takes place in a portion of the namesake planet Aquatos, albeit in a severely smaller and closed-off portion, with no walls allowing for the option of Gravity Boot movement. Because of the design of the place getting lost can be quite easy, and the narrow tunnels make avoiding weapons significantly tougher. In Capture the Flag both of the flags are placed opposite each other, with only the largest central crossroads room in between them. Said crossroads has tunnels leading in four directions, each of which ends in a T-junction, with each of the branching tunnels connecting to those of another T-junction.

Although the map design is not identically mirrored, most of the item placement is. Both the top and bottom-most tunnels have the same items, with the exception of the right-most junction, where an extra Morph-o-Ray and nanotech crate is located. The northern and southern tunnel leading to the center both have a pair of Charge Boots, with the west tunnel containing a Flux Rifle, and the right a Lava Gun. Lastly in the center is the powerful Minirocket Tube. 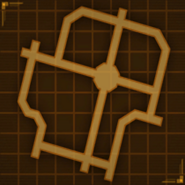 Aquatos Sewers map.
Locations in the Solana Galaxy in Up Your Arsenal
Community content is available under CC-BY-SA unless otherwise noted.
Advertisement