The Agorians were a species in the Breegus System. Agorians were known for being a race of aggressive warriors, who had a never-ending thirst for battle and bloodshed. They would always start campaigns to conquer entire civilizations at the slightest provocation, or for no provocation at all. They also operate a massive, traveling coliseum-ship called the Agorian Battleplex in the Korthos Sector, where live blood sports and gladiatorial combat were viewed by large numbers of Agorian audiences. Species like the Vullards or Fongoids, despite being non-aggressive, were held in particular contempt by many of the Agorians, who perceived them to be "weak"; as such, the Agorian military started unprovoked invasions against Vullard and Fongoid settlements on a regular basis. The Agorians did; however, consider themselves an honorable species, and would not break their code of honor often. However, the Agorians themselves would constantly change their own code of honor to better suit their needs. Some Agorians have become lazy and overweight as shown at the Agorian Battleplex with some of them either eating an endless supply of popcorn or drinks.

The Agorians are the only known sentient species in the galaxy to have completely stopped evolving.

In the field of battle, Agorians were typically led by Agorian Riders ridding an Agorian Beast. [1]

Ratchet & Clank: A Crack in Time

After Captain Qwark escaped back to Quantos with some Fongoids, he asked if there were any races in the galaxy that despised Nefarious and his goons. The Fongoids (either on purpose or by accident) suggested the warlike Agorians and even got the Agorians to pick up Qwark and take him to the Agorian Battleplex to discuss an alliance. Ratchet smelled something bad about the idea, but Captain Qwark ignored the advice. Despite Qwarks efforts and the Agorians hatred of Dr. Nefarious, the Agorians apparently had no real intention of doing anything about the Nefarious problem and instead had him become a gladiator (partly Qwark's fault because he told them he was a bloodthirsty warrior).

When Ratchet went in search of the Obsidian Eye, he had to fight off Agorians who were attacking the planet Lumos in order to get help from the Vullards with locating it. The Agorian Riders were the chiefs of their race, and had to be eradicated before Lumos could be secured.[2]

At the same time, Qwark found himself entered into the Bronze Cup at the Agorian Battleplex, and required Ratchet to help him through it.

Later on, Ratchet had to travel back in time on Morklon to save a Fongoid village from being destroyed by Commander Argos, a famous Agorian leader.

According to the Intergalactic Society of Evolutionary Biologists, Agorians were the only known race to stop evolving in the known universe, and no signs of change had been witnessed in known history. Agorians had large upper bodies but tiny legs; however, these legs are strong enough to help propel them across the battlefield. Agorians were also born by the mother laying eggs similar to Earth reptiles. Agorians apparently had many Glarf-Knells, a type of organ found in Agorians. [citation needed]

The Agorian Council For Equal-Opportunity Dismemberment was an Agorian council that governed Battleplex Arena challenges, made sure everyone was equal in combat, created challenges and etc. The council decided which warriors would be honored. If a warrior was decided to honorable, he would have his very own statue inside the Battleplex Lobby; however, Rogan the Mediocre had an uncle on the council that used his power to make Rogan an "honored" Agorian warrior with his own statue, even though everyone knew he was an amateur lacking such honor. The council also settles disputes, including the incident with Local Hunter's Union 865.

The Agorian Public Health and Water Slide Department is part of the Agorian Government and deals with Agorian public health and water slides. The department warned the Agorian Council For Equal-Opportunity Dismemberment against using deadly Virox Poison gas in an Agorian Battleplex Arena challenge known as Toxic Engagement. This challenge involves a Gladiator to fight a War Grok with Nerve Gas in the arena and using only a Wrench. The Agorian Council For Equal-Opportunity Dismemberment ignored the warning and did it anyway, though Ratchet defeated the War Grok anyway. 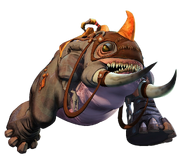 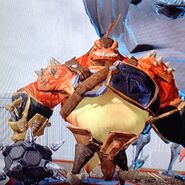 In the list the top is the lowest rank and descends until the bottom, which is the highest rank.

Relationship with other races

However, while the Agorians haven't been witnessed to attack the Terachnoids on a full scale level before, the Agorians will still use bully tactics against them, such as shoving a Terachnoid's head down a toilet or even going so far as to eat a helpless Terachnoid.

The Vullards seemed to be a favorite for Agorian aggression, as numerous Vullard colonies were invaded, as well as their homeworld Lumos. The Agorians seemed to attack them because the Vullards tended to be nonviolent, making even bigger wusses in the eyes of the Agorians. However, it appears the relationship has cooled down after the Vullards gave the Agorians Vullard built Fusion Turrets for use in the Agorian Battleplex, causing the Agorians to cease their war with the Vullards to focus on their new enemy, Ratchet. It's unknown if they are still in this current position.

Agorians are highly dangerous and resilient threats on the battlefield, capable of devastating attacks from close-quarters to long range. Explosives such as the Negotiator or the Constructo Bomb with the Skyburst and Barrage upgrades have been very effective against these enemies. The Constructo Shotgun is also a good choice, especially if it has the Choke and Galvanic upgrades.