1 egg per second, 4 robots per egg

Agents of Doom
Glove of Doom
AGENTS OF DOOM (Mods)

The Agents of Doom are small androids dispersed from the Glove of Doom and serve as a weapon product manufactured by Gadgetron, featured in Ratchet & Clank and its re-imagined re-release, Up Your Arsenal, Size Matters, also making a cameo in Secret Agent Clank. The Agents are dispensed from DoomEggs[1] launched from the Glove of Doom, and act as kamikaze explosives, running towards an enemy and exploding on contact.

The Glove of Doom was available for purchase from a vendor once Ratchet reached Eudora, for 7,500 bolts (reduced to 5,000 bolts with the Persuader).

In Qwark's retelling, the Glove of Doom was one of the later weapons Ratchet obtained. It became available when Ratchet entered the Deplanetizer, for 35,000 bolts. Ratchet could upgrade the weapon using Raritanium upgrades, and it upgraded with use to the Apocalypse Glove, improving its capabilities and damage, while not drastically changing its function. These Agents of Doom with the Apocalypse Glove used a jetpack to fly towards enemies and attack them. Additionally, Captain Qwark used his own Agents of Doom against Ratchet on the Deplanetizer, during "Stop Captain Qwark", which were spawned from a blarg generator thrown from his own Glove of Doom.

The Agents of Doom did not appear as a weapon in Secret Agent Clank, but can be deployed as an enemy during the final boss by Robo-Ratchet while Clank fights them.

The Glove of Doom in the original Ratchet & Clank itself is a black glove that fits onto Ratchet's hand, with a green circle in its center. In Up Your Arsenal and Size Matters, the Agents of Doom is a red, bulkier glove with silver fingers, which retains the central green circle.

The Agents of Doom robots are short, with a large circular head, blue eyes with the left eye larger than the other, and sharp teeth. In the re-imagined Ratchet & Clank, once upgraded to the Apocalypse Glove, the Agents of Doom fly with a blue jetpack towards enemies to attack them before self-destruct, and upon reaching contact with an enemy exploded in a blast radius that could damage nearby enemies. When upgraded in Up Your Arsenal and Size Matters, the Agents of Doom can also carry weapons on their shoulders, and fly jetpacks.

The Agents of Doom from Ratchet & Clank.

An Agent of Doom from Up Your Arsenal. 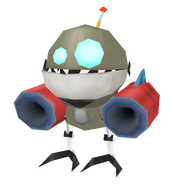 An Agent of Doom from Size Matters.
Add a photo to this gallery

The Agents of Doom are deployed to self-destruct when coming into contact with an enemy, or to bite them first repeatedly to damage them. This means that the Agents of Doom (in earlier levels) are best for fighting small groups of medium or larger enemies, as their damage could be split between multiple enemies or concentrated on a single enemy with no major cost. They are also good at destroying enemies hiding behind cover. However, when upgraded in Up Your Arsenal and Size Matters, they become more versatile once upgraded, by adding ranged attacks.

In the original Ratchet & Clank, the Glove of Doom was strong against most larger foes on the ground and capable of dealing with most threats, but useless against flying enemies and could be destroyed by enemy fire. In the 2016 re-imagined Ratchet & Clank, the Glove of Doom's Agents have a greater explosion radius when self-destructing, and when upgraded to the Apocalypse Glove, are able to fly with a jetpack towards enemies, making them even more broadly useful against most enemies and groups, particularly to supplement Ratchet's damage. In Up Your Arsenal and Size Matters, the Agents of Doom are not situational when upgraded, as they become far more versatile, and useful against any enemy.

In Up Your Arsenal, the Agents of Doom fill the same function at V1, in that they hunt out and destroy enemies on ground. At V2, they gain laser cannons, which they will fire at enemies until they run out of ammo, at which point they will self-destruct the enemies as usual. The V3 upgrade improves the rate-of-fire of these cannons. At V4, the Agents gain jetpacks. The first set of V4 Agents deployed will hover around Ratchet and protect him, functioning as synthenoids, until out of ammo. Any newly deployed Agents will act as normal on the ground, or replace those that ran out of ammo while in hover mode.

When upgraded to Agents of Dread at V5, the Agents deal far stronger nuclear explosions upon self-destructing, and their laser cannons are replaced with more powerful missile launchers. The Agents must be upgraded to remain useful, as at earlier levels, their damage drops off compared to other more versatile weapons such as the Annihilator or Disc Blade Gun. Conversely, the fully upgraded Omega Agents of Dread has 12 ammo and a power of 12,000, which is theoretically more powerful than the RYNOCIRATOR.

In Size Matters, at the first level, they are only capable of biting enemies at first level. At V2, they gain bomb launcher cannons, which become energy blasts at V3. At V4, the agents gain a jetpack, and the first set deployed will fly around Ratchet and protect him, making it a useful weapon. The Launcher Mod improves their range damage, and the Explosive Mod allows them to self-destruct after being used up. At all levels, the Agents are an all-around good autonomous weapon to substitute Ratchet's existing weapons, but should not be relied upon as a main source of damage.

In Secret Agent Clank, Agents of Doom appear as enemies used by the final boss, in which Robo-Ratchet may deploy them. They are easy to destroy but also easy to avoid, as running away works as well. This is helpful for the 'A Pretty Good Likeness' skill point.

The Glove of Doom was an office favorite among Insomniac Games employees,[2] explaining the weapon's reappearance in Up Your Arsenal as the Agents of Doom.

In the Insomniac Museum in Going Commando, a cut weapon known as the "Hounds of Doom" can be found, which have a similar appearance to the Agents but with the shape of a dog. The Glove of Doom is also left within the game's files, though firing it does not throw out any Agents and the weapon's texture is glitched.

The Agents of Doom in the 2016 reimagined Ratchet & Clank bear a resemblance to the Gadge-Bots from the original game. 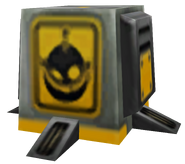